Expanding on the secret ingredients – the Monople Part 2 (Spheres, Inert gases, and Cubes) 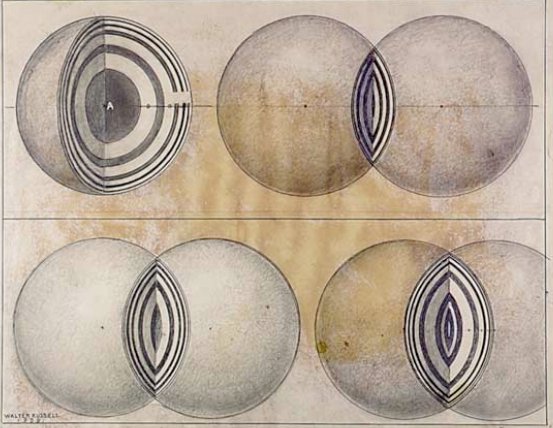 Please visit part 1 here to help in understanding my approach and current direction of my thinking.

The more I read, the more I sit with this, the more the origins of everything point back to the harmonic spherical waves.  Also called a Monopole.

Starting from a point and expanding outward gives us a hollow wave bubble or spherical wave.  We start from a non-dimensional point and arrive at the three dimensional sphere as soon as motion starts.

This sphere seems to be the secret ingredient in all of creation.  Nothing can happen in our current physical reality without these expanding spherical waves and then their harmonic interactions with each other.

Here are some nice quotes from my inspiration Walter Russell:

Figure 53 is the type of wave which begins with a hole and endeavors to close its hole by intersecting other hollow wave spheres to form biconvex lenses to aid it. Science terms these intersecting waves “wave interferences” and makes no explanation of their vast importance in furnishing the two curved tools which the Creator alone uses to create this curved universe of motion. -Home Study Course 3
Fig 53. This type of ring forms the zero cathodes of cold beginnings.  They are the product of the tool of creation controller by biconvex lenses.” 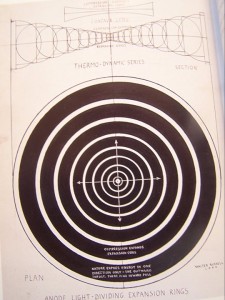 As every physicist knows, a wave is a hollow sphere of light surrounding a zero cold emptiness. In other words, it is all hole. The supreme effort of Nature is to fill that hole and produce solid spheres of intense heat. -Unpublished image 1955
Octave waves are caused by the reflecting mirror or radar or echo principle of nature.  The outward explosions of cathodes collide with outer explosions of harmonic cathodes throughout the universe three dimensionally and thus divide space into cube wave fields of zero curvature – or three pairs of boundary planes beyond which motion cannot pass.  It returns from its wave field boundary limitations as a “mirrored reflection” – or radar – or echo.  It is also repeated in reverse in its neighboring wave fields.  -Image text from “In the Wave”
Every true sphere is centered by one focal point of gravity.  This is true of the hollow cathode spheres as it is of solid anode suns. The supreme effort of Nature is to compress her nine-stratad hollow wave “bubbles” of Light into solid incandescent spheres of Light, within which the Creator records all forms of Mind-Idea for unfolding into the light0wave formed images which constitute creation. -Image text from “In the Wave”
Every wave is a sphere.  Spheres have but one centering focus.  Two waves expanding from two points spheres have but one centering focus.  Wave intersections create lenses, lenses have two extended foci. -Home Study Course 3

These quotes are from his later works where I see that he is expanding his view out to more of an entire cycle view and not just the small interactions and movements of just the vortex, pressure planes, and locked potentials.

These quotes bring up some interesting thoughts that I am exploring.  For example, he mentions the word cathode a bunch.  He also mentions the all important Inert Gases.  These are usually mentioned together described as the inert gases surrounding the cathode womb.  The cathode being the zero beginning or birthplace for motion and inert gases being the bridge, the recorder, and seeds for everything within this 3d Universe.

I wanted to touch on one quote in particular that catches my eye… where he mentions Fig.53. He says his type of ring FORMS the zero cathodes. Then he says these are the “product of” meaning there is something that precedes them (hollow sphere wave interference creating lenses).

So the Inert gases are mentioned as being two-dimensional multiple times throughout the work.  To me, we have to be careful here in understanding his meaning of 2d.

Based on his quotes and my understanding so far, 2d is just a descriptive label of certain interactions that are happening with this 3d wave Universe.

Let’s take a look at a few more quotes:

You will note that each string begins with a zero and ends with a zero. These are the key notes of each octave. They are the cathodes of every electric anode. They are called inert gases, such as helium, neon, argon, krypton, etc. -Atomic Suicide
The recording apparatus which gives form to those thoughts is an electric instrument which God uses to record His thoughts. Its name is wave-field. Its product is motion.” -Home Study Course 3
The answer is that God has a wonderful bookkeeping system to record all of the thoughts and actions of His imagined universe of seemingly separate things. All thoughts are recorded permanently in the zero elements of matter known as the inert gases which are the seeds of all Idea. Every thought, every desire and every action of yours is what constitutes your individuality. They are cosmically recorded in these seeds which surround that still center of Consciousness which is your Soul, just as a still center of gravity is surrounded by moving matter of earth.
It is first two-dimensional, for Nature is made up of single plane units, which are two-dimensional. -Atomic Suicide
These four rings of the inert gases are within each other in the same plane. They are, therefore, two-dimensional. -Atomic Suicide

So we see a few things from these above quotes.  He mentions the Inert gases as 2d recording plane units and that they are located around the cathode zero beginning.

He also says that God’s recording system is the wave field.  If we quickly touch on the cubic wave field this helps it all come together.

A cube is a 3d object with 6 flat sides.  These flat sides would be considered 2d by themselves.

These 2d planes are created when these spherical waves interfere.  Lenses are created and in turn create these “planes of zero curvature” or cube walls.  These don’t always have to be walls for cubes, as there many shapes in between.  But that is another article.  🙂

Here are a few quick example of the spheres interacting.  Lenses create the inner and outer cube wall planes which reflect and mirror/echo/radar in the process. 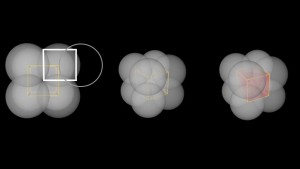 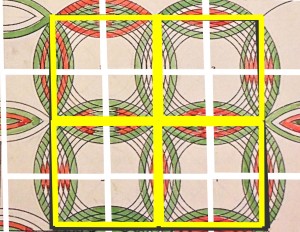 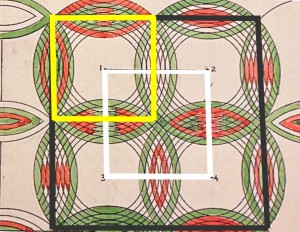 At the very bottom of the page is an example we are working on to help you visualize in 3d how these interactions work.  This one shows the Vesica Piscis that is created when the spheres interact/interfere and make up the inner cube walls like show in the images above.  You can also imagine that the centers of the spheres are connected to each other and the outer planes of the cube arrives!!!!!  You can manipulate it some.  See model at bottom of post.

To learn more about the lenses visit this previous article.

So again, he says the inert gases are the 2d recorders – and also says the wave-field is the recording appratus.  So if the wave field is built with the “flat” sides made by wave interference and lens creation then this could match.

Even with the Inert gases being inert, they still exist within this 3d motion based Universe.  So they can’t be stillness.  They have to be motion.  Maybe minimum motion but still motion.

If everything is made of light units just appropriately conditioned depending on where they are located in their cycle, then maybe inert gases are just light units that are conditioned by and located in a spot that doesn’t allow for any interaction.  Isolated or insulated from others by the “planes of zero curvature” or cube sides.  That these light units are sitting or located in these spots.

We also need to think about these spherical cathode waves as either being sexless or completely male or female, since all the parts in between are predominately one or the other.  Per Russell sex, male and female, begin once polarity happens.  Well polarity doesn’t happen until these spheres interact.  So what does that show us about these spheres?

I won’t go into what I think particles here or how we differentiate between waves and “particles” but that is also coming soon!

This still does raise some question on the details of it all.  Like how are things recorded specifically and does this relate to stillness.  How do Axions and Neutrinos fit in – because I think they do.  But not necessarily the description from our current Scientific community.

I feel like we are heading in the right direction.  Very exciting times.  I am seeing alot of new cool correlations in the work but everytime I go deeper I raise a couple of new questions.  So it goes…

Much love to all of you!
Chris